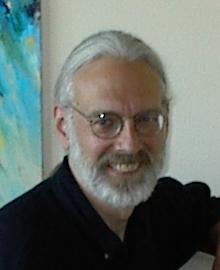 Systems researcher and ecopsychology therapist Dave Ewoldt started his diverse career as a U.S. Navy electronics technician specializing in microwave and satellite communications equipment and held a Top Secret security clearance to work on cryptographic communications equipment. After completing his service in the Navy, he spent one year at the Stanford Linear Accelerator Center where he was engaged in high-energy particle physics research and computer controlled process automation. The following three years in the Manufacturing Systems Engineering graduate department at UT Austin working in robotics and artificial intelligence resulted in him being listed in the Who's Who in Artificial Intelligence in 1985.

Dave’s degrees include software engineering and psychology. While at Eastern Washington University he was an elected officer in Psi Chi, the national honor society in psychology. He was completing a doctoral program in Applied Ecopsychology when he passed away.

Dave was co-founder and Sr. Analyst for the non-profits Attraction Retreat (“catalyzing personal empowerment, societal transformation, and environmental sustainability”) and Coalitions of Mutual Endeavor, and he was a practitioner and researcher in the field of ecopsychology—helping people remember how to think and act the way that nature works. He called himself a paradigm shift coach. He and his wife Allison co-founded The EcoIntegrity Center of Bellingham, WA (EcoBell), a branch of Attraction Retreat that served as a community hub for kindred spirits and a sustainable urban intentional community.

Dave was a member of a national speakers’ bureau on global warming and also spoke regularly and ran political campaigns based on the relationships among Peak Oil, global warming, corporatism, industrialism, the theft of the commons, dominator hierarchies and how the alternative of relocalization (the process of powering down and reconnecting with nature while utilizing steady-state economies and an Earth jurisprudence) will provide a practical, affordable process to create a sustainable future based on ecological integrity, social justice, economic equity, and participatory democracy.

His articles and essays have appeared in New Earth Rising, Culture Change, Rachel's Democracy and Health News, Energy Bulletin, Shan Newspaper, OpEd News as well as regional and local publications. His academic papers have appeared in the proceedings of the International Society for Chaos Theory in Psychology (1992), the International Society for the Systems Sciences (2006) and the Arizona Hydrological Society (2007).

The working title for Dave's last work was Connecting the Dots: Reversing Our Handbasket to Hell—a history and description of society's systemic disease and a framework, guidebook and toolkit for building multi-issue coalitions that can create the critical mass necessary for systemic, life-affirming, sustainable change.